This guy had been asked to stalk this mistress and also to spy on him. She came to find about it and she was incensed. The mistress used her feet to dominate him and this she did by sticking her foot in his mouth and nearly tearing his mouth apart. She also choked him as he could not breathe properly. The mistress then made him tell her who had sent him and what he had gathered so far.

Lady Milana hates perverts. This guy was one and she did not like that he lived near her. She did not want to experience any of his pervertedness. So she went on the offensive and she forced him to change. She forbade him from ever doing anything she considered to be perverted. The mistress used her high heels to crush his nuts and he got the message she was sending.

Mistress changes the way slave looks at her

This mistress noticed that her slave had been watching her and she was not comfortable. She could tell that he was having sexual thoughts about her. She wanted to change that image in his head so she used her smelly feet as well as her dirty feet to do it. She forced him to lick her heels and suck her toes after he had licked her bare feet. He was humiliated and he never looked at her the same way again.

Lady Leehanna was bored at home. She was chilling outside her house when her neighbor saw her and he tried to hit on her. She chose to string him along. She had a great time messing with him and she enjoyed watching him do what she asked him by lying to him that it was turning him on. The guy did his best to turn her on but it did not lead to where she hoped it would.

Madame Marissa is the kind of person who gives instant justice. She had watched this guy do something wrong and when she confronted him, he tried to justify it. The mistress was so pissed at him that she could not let him get away with it. She chose to use her stinky and dirty socks to humiliate him. She made him regret what he had done as she choked him and made him lick them.

When it comes to dominating guys for fun, there is nothing that this mistress cannot do. She felt like using her gorgeous ass to humiliate so she forced this loser to lie down and she facesat on him. She forced him to lick her ass and she also choked him as she facesat on him. The mistress enjoyed wiggling her ass on his face and watching how he struggled to breath. 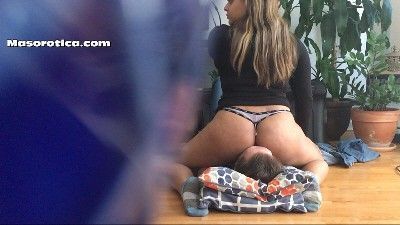 Mistress Gaia enjoys dominating guys for fun. Today, the mistress did not want to dominate this loser alone. She wanted to do it with her friend. So the two of them chose to dominate the guy and they had a great time turning his mouth into their ashtray. He was in pain but he could do nothing about it. He cried and begged for mercy but the mistresses ignored him.

Lady Betty and lady Bertie were angered by how this contractor had done the job they gave him. The mistresses had paid handsomely for his services but they were disappointed by the results. The mistresses chose to whip him while he was naked, spit on him as well as make him lick their dirty bare feet. He had no choice but to do as told and instructed by the mistresses.

Lady Levana nearly sprained her ankle while wearing her high heels. She had finished her errands for the day and she went back home. She removed the heels and she spat on them. She then asked her slave to lick them. She sat back and watched as he did what she wanted to the soles of her heels. When she was done, she had him rub her feet to soothe them.