Mistress Amberleigh and mistress Hamilton do not like guys who do not know how to keep time. They called a cab and this guy took his sweet time to reach there. They were mad and punished him for it. The trampled him and made him endure a lot of pain. Despite apologizing, the mistresses continued with their punishment. They wanted to make sure he was never late again. Their plan worked.

Lady Alice was home alone and bored. When she heard some noise in her neighbor's house, she knew there was someone home and she also knew he was a bachelor. She knew he had a thing for her so she decided to kill time at his expense. She called him and enjoyed ordering him around and making him do crazy things such as lick her shoes and also her bare feet.

Mistress punish guy who does their assignments

These girls like to party and do not have time for classwork. But they have this bright loser who does their work. He was was not doing their assignments properly thinking that they would not notice whichever grade their got. The mistresses were however keen on the marks they scored and when they realized he was not putting in much effort, they punished him. They sat on him and almost choked him. They crushed him till he agreed to do better. 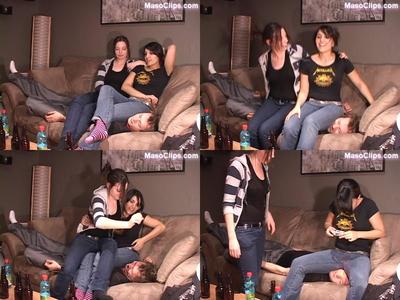 Cruel mistress humiliate guy for nothing

These mistresses are cruel. They led this loser to believe he had a chance with them. They even invited him back to their house. When he went, they used him as their slave. They made him lick their shoes and their feet. They turned him into a foot slave and made him also smell their sweaty and smelly feet. He even massaged and pampered their feet before being let to go away.

Lady Kara finally gets her revenge

Lady Kara had a bone to pick with this guy. He had wronged her long time ago and had even forgotten about it but them mistress never forgot about it. She kept a grudge and when she found a chance, she humiliated and tortured him for it. She crushed his hands with her boots before making him eat and lick the mud from her feet. That is when she was able to let it go.

Mistresses show slave how worthless he is

Mistress Diana and her friend mistress Alexandra wanted to show this slave how useless and worthless he was. They took him for a picnic but on the way they turned on him and crushed him with their high heels. They told him he was not being useful to them and if he did not improve, they would have to torture him and then chase him away and it was in his best interests to make sure it never happened.

Madame Marissa came home and found that her kitchen was smelling because of what her slave had done. She loves a tidy and neat kitchen and could not let the matter slide. She called her slave and she trampled him as punishment. She did not want a repeat of the same so she trampled him harder using her high heel boots. She made him scream and promise never to do it again.

Mistress Natasha is a bully. She likes to humiliate and make guys do what she wants. She enjoys it when her orders and commands are followed. And today, she made this guy lick her feet. Never mind that her feet were sweaty and smelling. She even made the poor guy lick the soles of her feet without caring how unhygienic that was. All that mattered to her was that her orders had been followed.

Mistresses punish guy for breaking up with their friend

This guy had broken up with these mistresses' friend. She was inconsolable and they did not know what to do. So they went to her ex and made him feel the kind of pain that their friend was feeling. They trampled him and tortured him using all kinds of methods they could think about. They did not care what they did as long as it made the guy cry out in pain.

Madame Madison and her friend Virginia were bored at home and wanted to have some fun. They called a slave and enjoyed trying new ways of slave humiliation. They made the slave lie down and they used their boots to crush him and make him feel untold pain. He felt the kind of pain he had only heard about and never really experienced. The mistresses even crushed his neck and did not seem to mind his cries of pain.