Mistresses punish guy for messing with their friend

These three mistresses learned that this guy had mess with their friend and they were not happy about it. They hunted him down and they punished him at their house. He was forced to endure painful trampling and degradation he had never gone through. The mistresses told him of his mistake and he promised he would never do that again. They warned him and told him he would have himself to blame if he did. 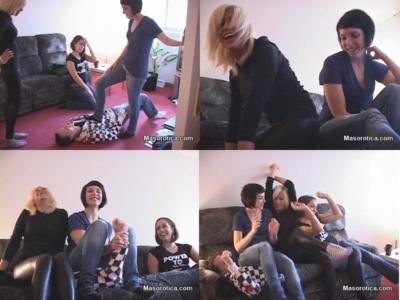 Lady Krasaviza is a cruel mistress and she does not hide that fact. She demonstrated it today as she tied up her slave cruelly with his hands and hands behind his back. She then had him try to crawl. She then cut her socks into small pieces and she had him chew them. The socks were smelly and sweaty and it was fun for her to watch her chew the socks.

Princess Serena and her disdain for small dicks

Princess Serena does not mess with guys who have small dicks. She loves to tease guys and to have them undress after she has turned them on. When she is done with it, she determines whether it is worth her time to go on. If one has a tiny dick like this guy had, she makes fun of them and chases them away. She cannot mess with something that cannot satisfy her.

Mistress Natasha humiliates slave by sitting on him

Mistress Natasha does not forget when someone pisses her off. She had to teach this loser a lesson and she did it as cruelly as she could. She sat on her slave after he had thought that she had forgotten what he had done. She had him lick and smell her feet as punishment. He was lucky that her feet were smelly. But it was still humiliating to him nonetheless.

Madame Svea does not like to punish a slave using the same method over and over again. That is why she had to humiliate him using a new method. She read about socks fetish and she tried it on him. She made sure her socks were smelly before she did it. She enjoyed torturing him with her dirty and smelly socks. She had a good laugh about it because of how he reacted to it.

Mistress BlackDiamoond found out that losers were willing to pay her whenever she was punishing and humiliating them so that they let her go. She thought about it and decided she could do with the extra income. So as she humiliated this loser, she enjoyed humiliating him financially when she realized that he wanted to pay to be let go. She agreed but had him add more money before she let him go. In the meantime, she kicked him with her sneakers.

Mistress Anna has great tits and she uses them to get whatever she wants. Today she wanted to try facesitting fetish so she teased this guy using her awesome boobs and he agreed to everything she wanted blindly thinking that he would turn her on. But he did not and she had fun at his expense. He however had fun too as he smelled her pussy and got to see her tits up close.

When this mistress realized that her slave was not about to change despite her encouragement, she knew time for talk was over and he had to be made to change. She used her high heels to do it. She even called her friend and the two mistresses had fun trampling him as cruelly as they did. They had him lick the dirty soles of their heels too and he was in pain and humiliated too.

Madame Marissa caught this loser conning the old couple from across the street and she could not let him get away with it. She was so mad that she had to punish him. And she did it cruelly. She took him to her house and she crushed his face with her bare feet. She also trampled the rest of his body and she made him beg her for mercy and she made him make it up to the old couple.

Mistress BlackDiamoond wanted this loser to feel a lot of pain. So she made him undress and she pierced his nipples. She then used an electrical device to shock his nipples. She laughed as he cried and pissed on himself because of the fear as well as because of the pain. He begged for mercy and requested her to do anything to else to him but not to torture him with pain.